Let me paint a picture for you. Tonight, we had Manolo’s first ever company Christmas party. Dinner out in Rapperswil. Pretty darn exciting.
So we arranged for the kids to spend the night with Titi, Monika & Heinz so that we could attend the swaray.

Keep in mind Manolo is a bike mechanic here. Expectations for the party were in check with that.

We arrived in Rapperswil for 4:30 to find the party in full swing in the shipping container-turned store that is the signature of Stomvelo.

Beer and pretzels confirmed that this was the right place. The party-goers mostly represent Generation Y. Born in the 80s or earlier with piercings, tats and straight brimmed ball caps. There were a few other oldies in the space so we gravitated towards them. By “oldies” I mean the parents of Manolo’s boss. We hung out with them.

And then things shifted. After a couple cups of Grüwein (Swiss version of mulled wine. Yum!) we set out as a group to wander through the old town of Rapperswil enroute to the restaurant. With the Christmas lights twinkling in the cool night air this did feel like a bit of a pinch-me moment. 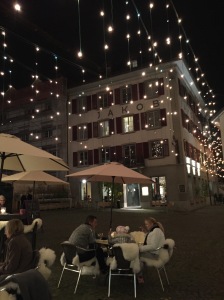 We arrived at the restaurant which seemed surprisingly upscale for a bike-shop gathering. The first sip of wine confirmed that this was indeed upscale. (Unfortunately, that first sip highlighted my lack of knowledge of  Proper Swiss etiquette. It was quickly pointed out to me that it is gauche to drink before the first cheers. One waits until the other 50 guests have a drink as well for us to all cheers together. Noted. Won’t happen again. I promise.)

The wine was from the personal cellar of the owner. The YOUNG owner. Clearly the e-bike business is good.

Right out of Pretty Woman, the spread of cutlery indicated the meal would involve many courses. Many was an understatement.

Then a Thai inspired soup that was perfection.

A salad with seared tuna and avocado. To. Die. For.

Then a delicious fish main course with a sauce made 90% of butter. (I noticed the cutlery placement was a bit off as the next set was a small size, so I self corrected and chose the larger tools to proceed with the entree. Hmmm)


After gobbling this up I sat back to begin anticipation of dessert, ever hopeful for a good tiramisu.

To my horror, I watched as the servers began passing out another entree. WTF!? But I just used my entree cutlery in that last entree! Why is there so much food!?


All the while we’ve switched to another choice of wine from the personal cellar. Seriously, since when do bike shops do high-brow so well!? 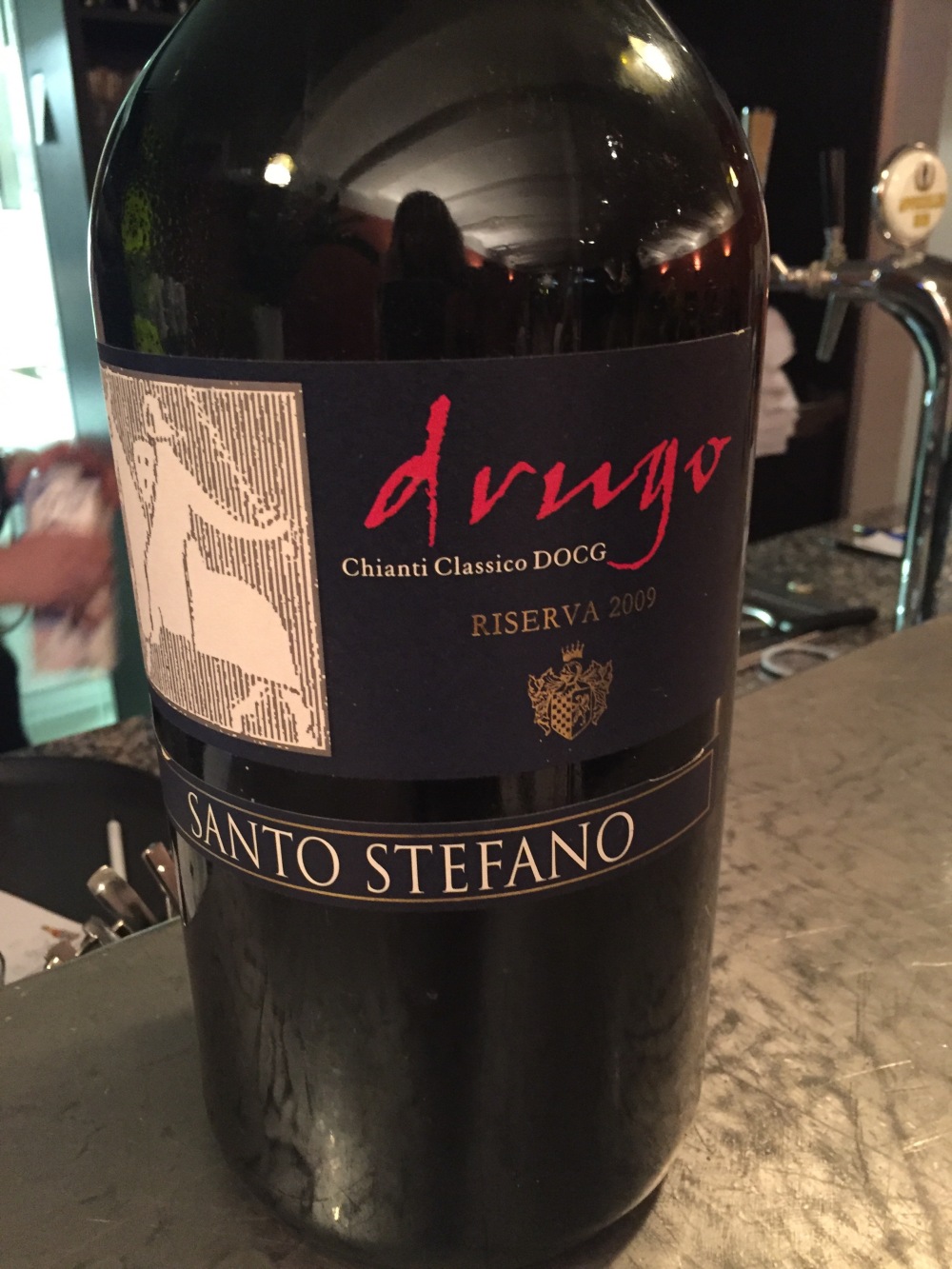 Finally dessert, thank goodness. So, so full. And yet still eating.

All the while, I’m well aware of the time. 10:30 passed some time ago and we’re getting dangerously close to 11:00. Whoa, that’s late! So glad we’re nearing the wrap up.

Except those darn servers started to come around with fresh plates and cutlery.

Why are you bringing out more food?? The fullness had reached the point of feeling very gross so I knew I would pass on whatever was served.

And then they presented lovely cheese platters…darn it!


And no one was showing any sign of leaving. We had an hour train ride to get home, we needed to get this show on the road.

By midnight, having arrived at this party 7.5 hours earlier, we finally felt as though we could start saying our goodbyes. This is always the point of a social gathering when Manolo becomes the most chatty. It is PAINFUL!

And that’s when things turned badly. The late-night train schedule doesn’t resemble the mid-day schedule. We arrived at the station 3 minutes after our train departed. The next one would be in 50 minutes. So painful. Rookie mistake. We should have checked the train schedule long before we planned our exit from the restaurant.

So we settled in for the big wait. And we waited.


And then we noticed that a train was sitting on the platform ours would depart from. “There’s our train already. We might as well just wait on it.” Good plan, so we headed over to it.

I got on. Manolo did not, for some reason. The doors closed. I opened them. “Hey, come on.” He was still on the platform trying to buy his ticket on his phone.

The doors closed again and this time the lights on the train also went out. I pressed the door button. Nothing. I pressed it again, rapidly. Nothing.

And then slowly but surely it started to move.  Me on the inside, Manolo on the outside.

To give you the real feel of it, here’s the texting conversation that ensued.


Followed after a while by: 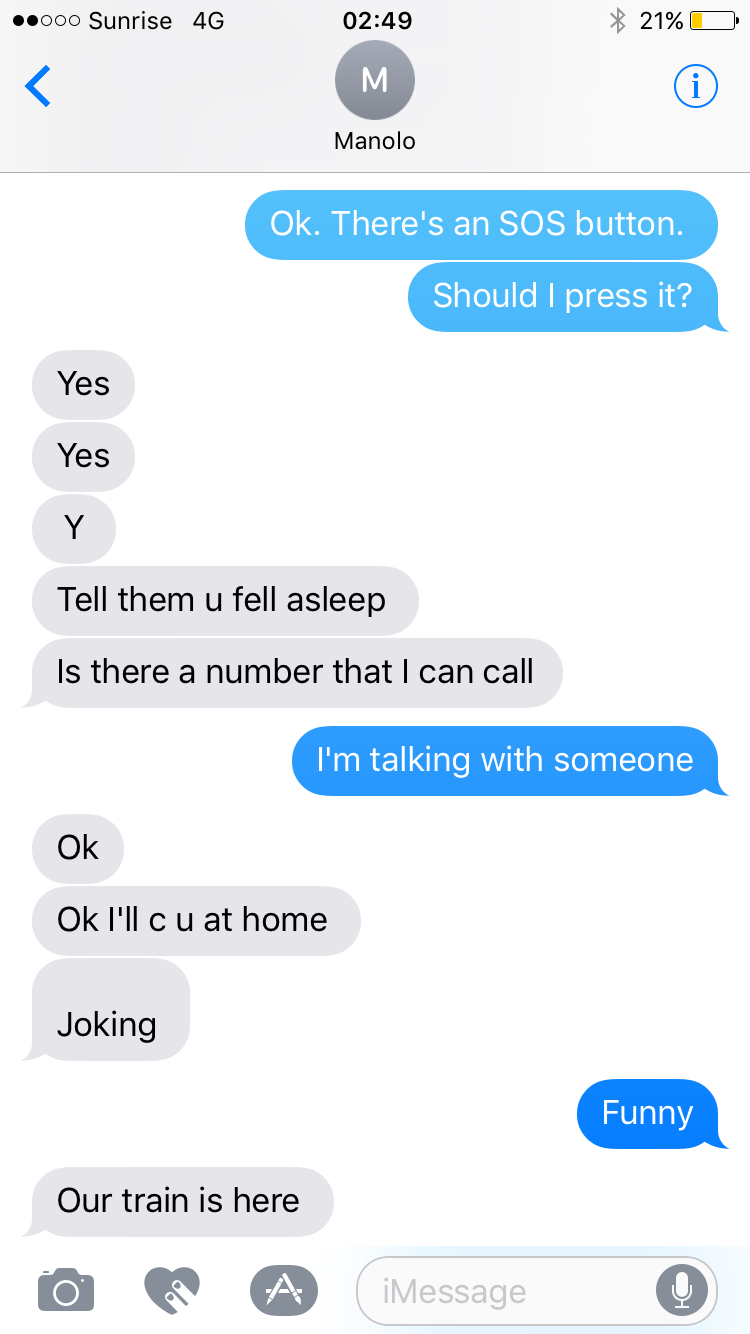 So the great irony was that we had loads of time to wait for our train. Now I found myself in a position of being unable to catch that train. The next one was in another hour.

So I pushed the panic button. Literally. I pushed the SOS button and used my most favourite German phrase. “Sprechen Sie English?” There was a lovely lady on the other end who did, indeed, speak English. Thank God!

She confirmed that the train I was on was in fact done for the night. She advised me to walk the length of the train in hopes of catching to conductor.


After passing piles of vomit, garbage and many sets of locked doors, I came upon the nightly cleaning crew. They answered “Nein” when I asked them my favourite question.

But they did have a special key to unlock a door. One of them guided me along as we jumped out of the car (with no platform it’s a ways down!) and across the tracks to the edge of the yard.


We followed the chain link fence to a gate which he opened for me.

And that’s when I started to run. Forest Gunp style. I now had 13 minutes to make it back to the station, find Manolo and board our train. So run I did.

And by miracle, I made it. I found my way back to the train station and onto the train I should have been on in the first place.

And we laughed. And laughed. And marveled at how at 1:30 in the morning, the train was more full and alive with energy than in the middle of the day.


Arriving back in Winterthur a full 12 hours after we set out for the party, exhausted and slightly traumatized by the evening’s events.

But boy does it make for a good blog post! Nothing but adventures over here.